DOCTOR B
Doctor B is Mother Dog's eldest son and Mister Pup's big brother.
His full name is Doctor Beggar, but he finds that name too long and awkward for a dog, so he goes by Doctor B. He loves good food and is often making plans to sniff some out. His little brother (who also loves tasty food) is always willing to help him. But Doctor B's plans don't always seem to work out the way he intends. 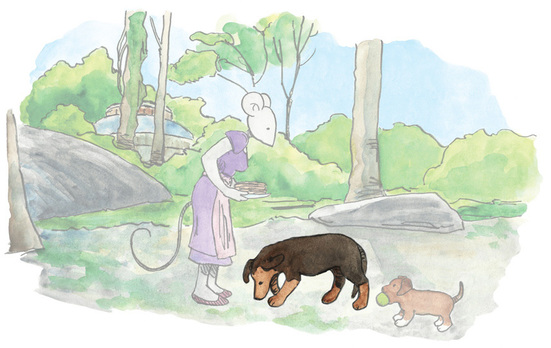 MISTER PUP
Mister Pup is Mother Dog's youngest son and Doctor B's little brother.
His mother thinks of him as a little gentleman and calls him "Mister" Pup (because even as a puppy, he already has a strong will and his own unique way of doing things).
He likes to contribute to his big brother's plans, especially when they promise to result in delicious food, but sometimes he doesn't fully understand what is brother is asking of him and ends up making a plan of his own.
He hasn't learned to talk yet (because he always has his ball in his mouth), but always finds a way to make himself understood. 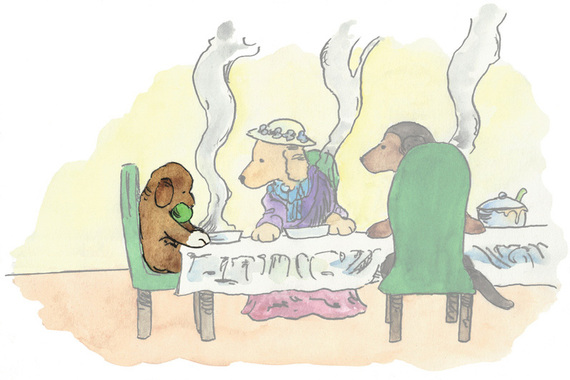 MOTHER DOG
Mother Dog is very loving and welcoming; her door is always open to everyone.
She does her best to organise things so they will go as smoothly as possible, which is often quite difficult with her two sons getting up to mischief and all the unusual things that happen in and around her house. 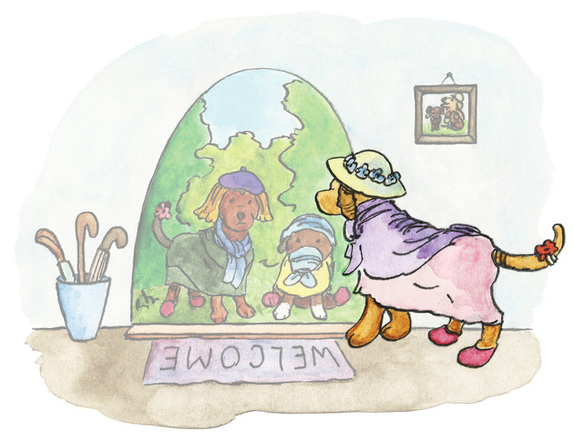 THE SHY DOG
One day, The Shy Dog accidentally comes across Doctor B and Mister Pup in the park. He hides behind bushes and doesn't dare come close to anyone. But when he falls in the water and can't get himself onto dry land, he has to accept a helping hand.
Will the animals in the park succeed in winning his trust? Let's hope so, every animal needs a friend! 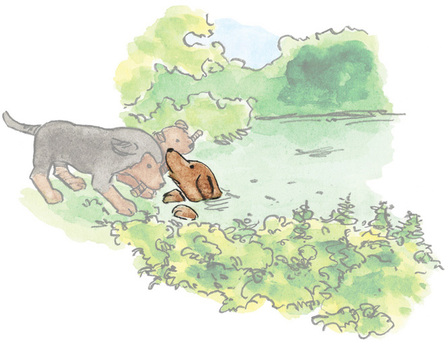 MOUSEKIN
Mousekin is Father and Mother Mouse's daughter.
She lives with her parents in a beautiful round house next to Striped Tail Raccoon.
Mousekin likes to listen to the exciting stories Uncle Mouse tells about his globetrotting.
She dreams of becoming a ballerina, but who will be the one to teach her to dance? 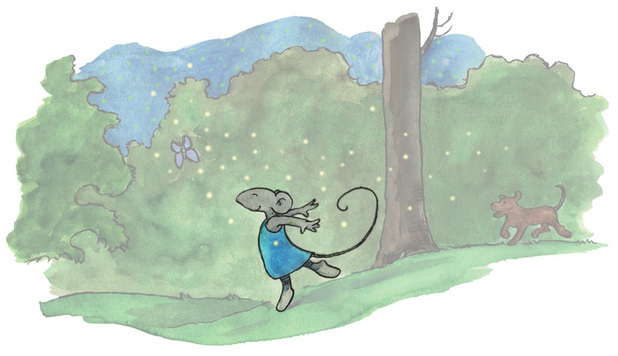 FATHER MOUSE AND MOTHER MOUSE
Father Mouse and Mother Mouse are Mousekin's sweet, caring parents.
Father Mouse tells wonderful bedtime stories. One of Mousekin's favorites is the story of the Moth, who flutters through the park at night and inspires all the fallen stars to fly up into the sky again.
Mother Mouse is very resourceful and bakes the best pies in the park. When Mousekin loses her baby tooth, she invites the Tooth Fairy to visit her. 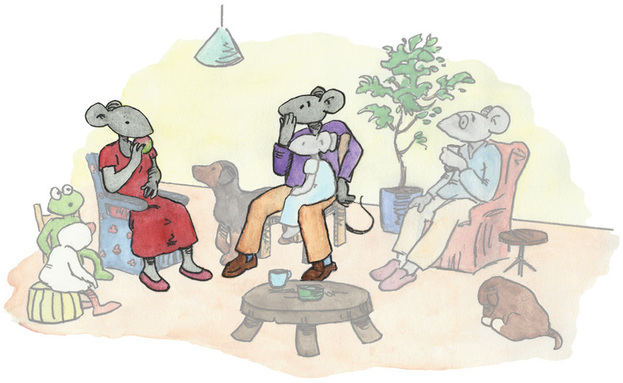 UNCLE MOUSE
Uncle Mouse is Father Mouse's brother and Mousekin's uncle.
He is a world traveller who tells exciting stories about his adventures. The tales Mousekin loves most are about their family in Vondelpark in Amsterdam and Hyde Park in London. 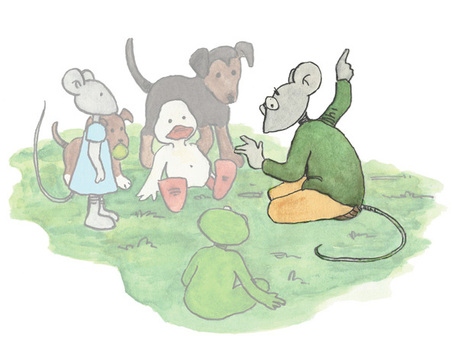 DUCK
Duck is a cheerful, charming girl.
She enjoys playing with her friends, Frog, Doctor B and Mister Pup and sometimes joins Squirrel on an evening walk.
She likes to make jokes and laugh a lot, but she is also quick to stand up for animals in trouble. 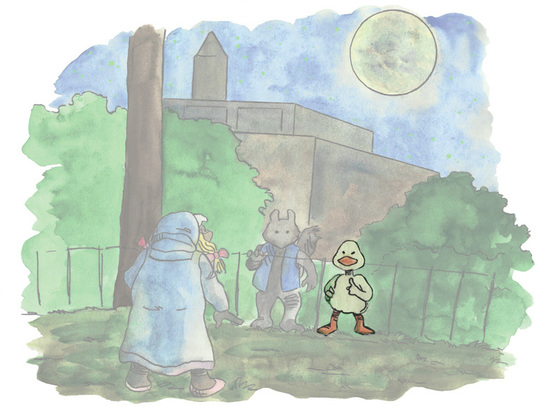 FROG
Frog is a bold little fellow with a lot of imagination. He sometimes gets scared or feels sad without good reason. Fortunately, he always has his friends around to take care of him and cheer him up.
He lives in a small cottage by the water. 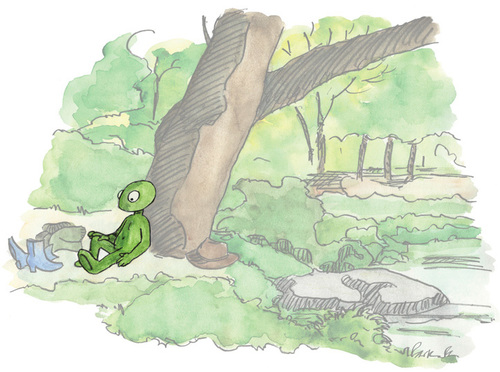 STRIPED TAIL RACCOON
Striped Tail is a grumpy old gentleman who loves quiet and just wants to be left alone.
When the Mouse Family come to live next door, the cries of newborn baby Mousekin wake him early every morning. So he decides to move into his basement. But he isn't even left alone down there, as every once in a while an adventure comes knocking at his door. 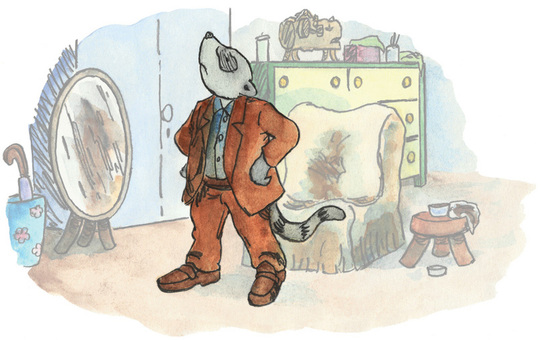 SQUIRREL
Squirrel is a wise and clever young fellow who lives in a self-built treehouse. His friends don't always appreciate how insightful and smart he is, but when the other animals don't listen to him, they often find themselves getting into trouble. 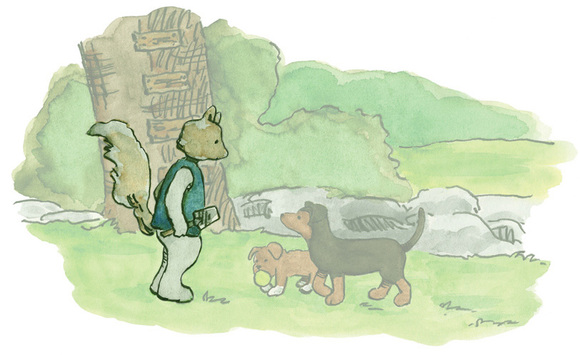 MISS VIRGINIA
Miss Virginia is a teacher at the Dog School, where she gives classes to Doctor B and Mister Pup.
That is . . . if they turn up!
Because she is a Virginia opossom, she lies on the ground and plays dead whenever she's afraid of something. 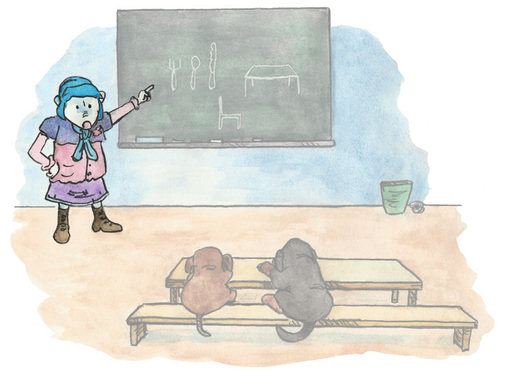